EDINBURGH, UK: The chief executive of the UK’s Oral Health Foundation (OHF) told the media in November that HIV could be transmitted through the sharing of toothbrushes. His comment was later corrected, but not before it had been published on the OHF’s website and on Dentistry.co.uk. As the international community prepared to mark World Aids Day 2020, Chief Executive of HIV Scotland Nathan Sparling said that misinformation about HIV remains deep-rooted.

Dr Nigel Carter, OBE, of the OHF made the comment in November when responding to a study which showed that SARS-CoV-2 may be passed to others through the sharing of toothbrushes.

Carter said: “There are many hundreds of different bacteria and viruses in our mouths and those sharing a toothbrush could be passing these on to others.” He added: “While this might be something relatively harmless, such as a common cold or cold sore, if the person you are sharing with is infected with hepatitis B, HIV and now coronavirus, these could also be passed on via the toothbrush, with severe health consequences.”

The OHF published an almost identical quote in a June 2019 article about sharing toothbrushes, but attributed the quote to Dr Ben Atkins, a dentist and OHF trustee.

Carter revised his comment to exclude the HIV reference, and the quotes were changed on the OHF site, and on Dentistry.co.uk, but he later defended his claim in comments made to PinkNews. He told the online LGBT+ publication that “only a couple of documented cases” of the transmission of HIV through toothbrushes had been recorded since the 1980s—it was possible but extremely rare, he said. “The Oral Health Foundation is not putting this forward as a primary means of transmission for HIV,” Carter told the publication.

“Even in blood, HIV is a very fragile virus which does not survive for long at all once outside the body” – Nathan Sparling, chief executive, HIV Scotland

Sparling said on Twitter that it was “Quite shocking to see the chief executive of [OHF] suggest that HIV can be passed on through sharing a toothbrush.” He tweeted that it showed “how deep-rooted misinformation about HIV transmission is”. He said that he and his colleagues had heard stories of “dentists that leave people living with HIV to the last appointment, and much more”.

“HIV cannot be transmitted by saliva,” Sparling told PinkNews. “Even in blood, HIV is a very fragile virus which does not survive for long at all once outside the body. Therefore, any risk associated with, for example, bleeding gums, is entirely negligible.”

“To our knowledge, the only cases where HIV transmission has been potentially attributed to a toothbrush are from the early 90s and involved people who were not on treatment and were at late-stage HIV infection. The cases in which these are mentioned conclude other transmission routes for the cause of infection,” he explained. 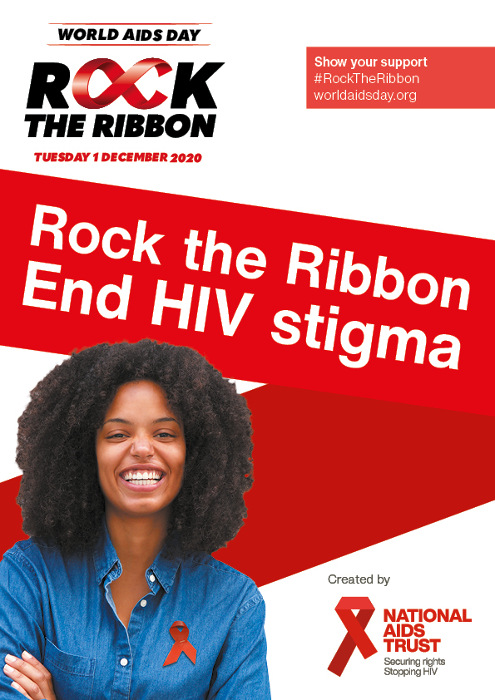 The UK World Aids Day campaign asks people to “rock the ribbon” as a sign of support and solidarity. (Image: National AIDS Trust/Shutterstock)

World Aids Day is observed annually on 1 December by all United Nations member states. This year, those living with HIV/Aids have faced additional challenges owing to the SARS-CoV-2 pandemic.

“We are winning the fight against HIV, but people living with HIV still face unacceptable levels of discrimination and stigma,” the UK’s National AIDS Trust stated in its World Aids Day 2020 campaign material. It said that HIV diagnoses were falling in the UK, but that there was no room for complacency. “There are still 105,200 people living with HIV in the UK, there is no cure, and people still face stigma and discrimination that can limit their opportunities, preventing them from living full and happy lives.” The HIV/Aids rights charity pointed out that those living with HIV/Aids were more likely to be suffering from poverty and poor mental health, and it urged UK residents to help to bring an end to HIV/Aids-related stigma.

The US government’s theme for World Aids Day 2020 is “Ending the HIV/AIDS Epidemic: Resilience and Impact”. In an online blog post authored by key figures in the country’s fight against the virus, it was stated that the 2020 theme was especially poignant, “as our HIV community has been newly challenged by, and often led the response to, COVID-19 in communities around the globe. COVID-19 has not only forced us to adapt our response to HIV/Aids in communities to ensure continuity of services, but also reinforced the urgency of ending the HIV/Aids epidemic in the US and around the world”.

The World Health Organization says that HIV/Aids continues to be a major global public health issue. The agency has estimated that 38 million people were living with HIV/Aids at the end of 2019 and that nearly 33 million people have died from the virus since it was first observed in humans in the early 1980s.

Clefts of the lip and palate are the most common birth defect of the face and mouth. Even children who undergo cleft surgery are often at an increased risk of caries, periodontal disease, and other oral health and well-being issues as they grow. These children require regular dental care to ensure adequate monitoring, education, support and treatment in order to prevent oral disease and achieve the highest possible quality of life. FDI World Dental Federation has joined forces with Smile Train, with funding and crucial support from GSK Consumer Healthcare, to provide essential resources on the standard of oral health and dental care for children with clefts. The first deliverable for the two-year project is the Oral Health in Comprehensive Cleft Care guidelines, which will be presented in a free webinar on Tuesday, 29 September. In an interview beforehand, the project collaborators together spoke with Dental Tribune International about the initiative.

Like most industries, the dental industry has been severely affected by the SARS-CoV-2 pandemic. The entire European and international economy are facing an enormous recession. Despite the difficult current circumstances, the Association of the German Dental Industry (VDDI) has a positive outlook eight months before the International Dental Show (IDS). Dental Tribune International spoke with Chairman of the Board Mark Stephen Pace about the current situation in the industry and the ongoing preparations for IDS, which is scheduled to take place as planned from 9 to 13 March 2021 in Cologne in Germany.

COLOGNE, Germany: Trade fairs are all about face-to-face contact. The organisers of the International Dental Show (IDS) are confident that next year’s event will be able to take place, and they have revealed the basic principles behind a host of measures that they say will make networking and personal interaction at the event as safe and successful as possible.

PRAGUE, Czech Republic: Given the global nature of the ROOTS community, the event organisers have been closely monitoring developments regarding COVID-19 around the world. For the safety of attendees, it has been decided to postpone the event to 20–23 May 2021. ROOTS SUMMIT 2021 will still be held at the Cubex Centre Prague in the Czech Republic.